In the 46th minute of this evening’s Premier League tie between Manchester United and West Brom, the relegation-threatened Baggies seemed to have won themselves a lifeline.

David Coote pointed to the spot after Bruno Fernandes hacked at the leg of Chelsea loanee Conor Gallagher, which caused the central midfielder to bundle to the floor.

Coote, the man who didn’t punish Jordan Pickford for the challenge that left Liverpool’s Virgil van Dijk with a long-term knee injury, went over to the VAR monitor and overturned his original decision.

Conor Gallagher brought down by Bruno Fernandes. Penalty initially given, but overturned by the assistance of VAR. No penalty to West Brom #MUNWBA pic.twitter.com/BZ8eQtH6pO 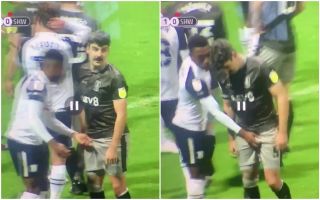 Slaven Bilic never shies away from things post-match and we can’t wait to see the Croatian’s reaction considering how things have turned out.