The Arsenal centre-forward has been a subject of transfer speculation recently on his current contract situation at Arsenal with his current contract ending in the next 18 months and his unchalant attitude in not wanting to sign a new contract willing to sign a contract if it is really improved or the team qualifies for champions League this season which is likely impossible due to their position in the league table as they are rooted 9th on the table. 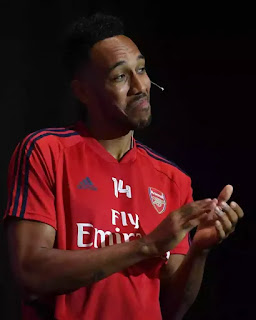 It was seen that the Arsenal forward posted on his Instagram story clearing transfer speculations with six words “Dont listen em, listen music better”. it could be indirectly pointed at the recent transfer speculations telling his fans to not listen to them putting the minds of Arsenal fans to rest on the future of their most important forward this season.

RELATED: Arsenal hoping to get Psg Wonderkid on a free

The player has been an important figure in the team ever since he arrived from borussia Dortmund in tje 2017 January transfer window under then manager arsene Wenger and has scored a total of 64 goals in 104 appearances.

Arsenal has always been known in selling their star players but Arteta would will be looking to change that policy and convince his star striker to stay at London club.