RB Leipzig centre-back Dayot Upamecano has ‘liked’ a post on Instagram linking him to a move to Manchester United.

Upamecano, 22, joined RB Leipzig in 2017 from Austrian side RB Salzburg in a transfer which cost Julian Nagelsmann’s side a modest £9m, as per Transfermarkt.

Since his arrival in Germany three-years ago, the commanding French centre-back has gone on to feature in 123 matches in all competitions for RB Leipzig.

Upamecano’s blend of physical presence mixed with his pace and on-the-ball technical ability have seen him emerge as one of Europe’s most highly-rated defenders.

Having recently renewed his deal with RB Leipzig but with a new contract containing a lower minimum release clause (as per BILD, via The Sun), the Frenchman’s long-term future has been the subject to much speculation.

However, the latest development in the ongoing-saga could prompt United fans into a frenzy after the man himself appeared to ‘like’ a post on Instagram linking him with a move to Old Trafford. 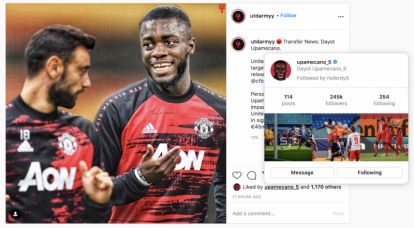 Paul Pogba reportedly keen on running down his contract