Manchester United midfielder Bruno Fernandes was the hero for his side again during yesterday’s Premier League match against West Brom.

Fernandes, 26, was among the goals during his side’s narrow 1-0 win over Slavan Bilic’s Baggies in last night’s late kick-off after the Portuguese star converted from the spot.

Yesterday’s match saw more VAR contriversies after Fernandes himself conceded a penalty which was later overturned and moments later found himself taking one up the other end.

The 26-year-old’s first spot-kick was ordered to be retaken after goalkeeper Sam Johnstone appeared to come way off his line before saving the initial attempt.

Fernandes did eventually convert from his second attempt to gift his side the lead, however, a behind-the-goal photo has since been released which shows that had Fernandes not have scored his re-take, he’d would have likely been awarded with a SECOND re-take due to the same offence from Johnstone. 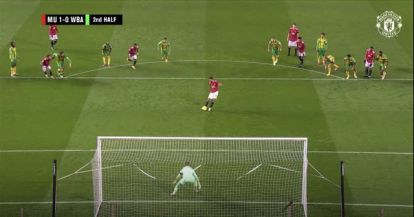