Chelsea are currently looking at options to fill the void in their backline after the departure of both Gary cahill and David luiz last season, and have identified Barcelona B center back Xavier Mbuyamba who also plays for the Netherlands as a possible replacement and would be economically viable as he would be gotten on a free transfer at the end of the season despite signing a deal last season with the Spanish giant to stay at the club till 2023, as he was made to understand his chances of getting into the first team was slim due to the presence of Gerad Pigue, Samuel umtiti, Clement lenglet and currently on loan center back Tobido. 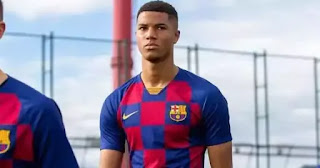 The 18 year old Barcelona B center back Xavier mbuyamba is already a hot prospect being targeted by other European Giants such as Juventus, Inter milan, Real Madrid and Az alkmaar his physical presence and height of 195 cm is imposing enough just like Virgil van dyke and makes it impossible to contest an Ariel duel with him, he also has the ability to play as a right back

RELATED: 7 LOAN PLAYERS THAT COULD TRANSFORM CHELSEA TO BEING A EUROPEAN POWERHOUSE

His agent told Voetball Internation “The uncertainty of the player playing for Fc Barcelona is unlikely, even Ansu fati that made a huge impression last season is being said to be loaned out by the club, how do you get to develop as a player at such a club”.

The agent further said ” The biggest clubs in the world are all after Xavier and Real Madrid is one of them although the chance of him getting playtime there is also unlikely, Chelsea are in the pole position to get the player”.

The agent also talked about Chelsea new philosophy “Last year after the transfer ban you could feel an new atmosphere in the club due to the head coach policy in entrusting young talents with the chance to develop, and i think my client will greatly benefit from that project.