It was reported few days ago by Major sports media outlets like Metro, Goal and Skysports that Chelsea had agreed to activate the buyout clause in the contract of the highly rated Rb lepzig centre forward Timo werner which caused a lot of happiness in the hearts of Chelsea fans worldwide, but the fact is that Chelsea only agreed to activate the clause but have officially not bought the player yet, which leaves any club interested in the player to make a move with Manchester United the recent club willing to bring the player to old Trafford after the players exploits this season. 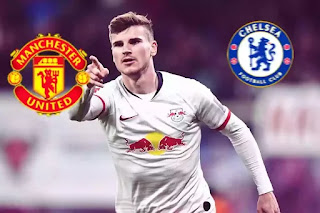 Manchester United are looking forward to bring the player to the club after his exploits for his club both in the Champions league where they eliminated Mourinho managed Tottenham Hotspur and Bundesliga where they are currently 3rd in the league table behind Borussia dotmund.

Manchester United are confident in bringing him in after strong links by both Liverpool and Chelsea they see the 23year old as a long term solution to their team problem going forward after recently extending Odion ighalo loan contract till January next year.

JUST IN  Video: Man United’s new signing Facundo Pellistri is welcomed to English football with an early two footer for the U23s

Rb lepzig are reluctant to letting their main talisman leave but the recent move by clubs in trying to activate his release clause leave their hands tied. kane is an option if the deal eventually fails to materialize but a move for harry kane looks very unlikely as Tottenham are asking for a fee around the region of 150 million euros.