There have been lots of reports coming out lately from big sport newspaper such as The Sun, Espn and lots more reporting Lampard’s interest on selling out of favor kepa and replacing him with Borussia Dotmund shotstopper Roman Bürki.

It comes as no surprise because kepa has been a shadow of the person Chelsea paid 72 million euros back then for in the 2018 summer transfer window from Atletico Bilbao a world record fee for a goalkeeper before Liverpool broke it after buying Allison becker from As roma in the same summer.

RELATED: Emerson uncertain over Future at the Stamford bridges after Chelsea got linked to Tagliafico

But is Roman bürki worth replacing or even displacing kepa from the team? All that is what we would discuss on this article. 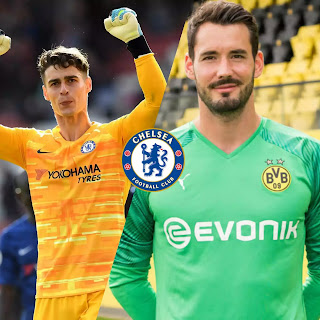 Roman bürki have been pretty decent for borussia dotmund ever since Roman weindferler hanged up his boots, But he has barely lived up to expectation causing his team last season a massive slip on the race to the title which dramatic errors leading to goals which resulted in bayern closing in on the massive gap borussia dotmund once created at the top of the table that season, which an off-form Bayern later won the title on last game of the season.

Kepa on the other hand has been class for chelsea since courtious left for Real Madrid but has recently seen his form going massively downhill all down to his arrogance to his coaches and in rare cases fellow players an example is what we witnessed last season when his then manager Mauriso Sarri requested him being substituted but he arrogantly refused to be substituted even though it was very obvious that he was performing below par in the game.

He has also made a whole lot of errors that eventually lead to goals this season, an instance is the game against ajax in the champions league where he was a complete shadow of himself and ever since that game, Frank lampard lost faith in him and made 38 year old veteran shotstopper Willy cabrello the number one goalkeeper spanning from early January to febuary before the corona virus outbreak that eventually lead to the premier league being suspended. Frank lampard even went as far as registering an academy goalkeeper Robert Green for the Knockout stages further putting Kepa’s chelsea future in a big question mark.

Even with all that said it will be hard finding a buyer for kepa has he haven’t really done enough to justify his heavy price tag and with the corona virus impacting the economic power of most clubs Chelsea should be ready to take a very big loss on the sale of kepa as no club would be able to meet with his valuation. Should kepa not move to a new club he would be forced to be second choice which looks very likely, but Roman bürki being the primary target for first choice remains a question on the transfer policy of Chelsea and the competency of Chelsea sporting director Marina on why Chelsea would buy someone worse than the proposed second choice goalkeeper “kepa”.

The possible goalkeeper based on form that could easily displace kepa as forst choice would definitely be Dean Henderson but he has made it clear that he has the dream of being Manchester United number one a feat likely possible after loads of errors from David de’gea and him being British something Manchester United values.

We suggest Lampard tries to bring out the best in kepa as we have seen flashes if class in him and matches he single handedly saved Chelsea by delivering world class saves. An experienced goal keeping coach should be hired to boost him mentally and bring out his confidence in wanting to be chelsea number one, and talks about Roman bürki joining Chelsea should disregarded by the Chelsea board.